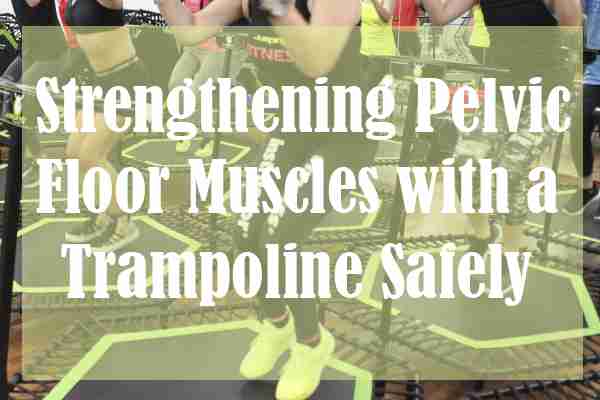 A trampoline is a unique device that is often used for recreation. However, what most people don’t know is that it can provide certain health benefits as well.

Jumping on a trampoline is a fun way to get in good shape, improve your lymphatic and immune systems, reduce cellulite and strengthen the pelvic floor muscles. This last benefit is the focus of our article.

What is the pelvic floor? 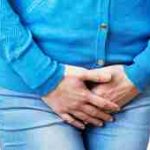 The pelvic floor is the layer of muscles that support the bladder, bowel and the uterus. The sphincter, which is among these muscles, allows us to control our bladder.

The muscles of the pelvic floor are also responsible for arousal and sexual pleasure in both genders. Furthermore, when it comes to women, it plays a special role even during pregnancy. It provides support for carrying the baby and assists them during the birthing process.

Unfortunately, time, age, obesity, and sickness can have a negative impact on these muscles. But this is true for any muscle in the body. The only “exclusive” causes of a weak pelvic floor are constipation, pregnancy, and childbirth. Thus, women tend to be at a greater risk of suffering from a weak pelvic floor than men.

The most common symptoms of a weak pelvic floor are a lack of bladder control and unusual pain during sexual intercourse. In extreme cases, even walking and sitting can severely strain the pelvic area.

Luckily, using a trampoline can put an end to most of these symptoms. Rebounding (the act of jumping on a trampoline or a similar device) was once even an Olympic sport. Based on research from 1980, NASA scientists concluded that rebounding is actually 68% more effective than jogging.

Does jumping on the trampoline strengthen the pelvic floor? 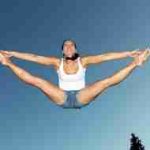 This is a question we are often asked, and the answer is yes! The trampoline works like magic on strengthening the pelvic floor muscles. When rebounding, the muscles of the pelvic floor contract to make sure everything is in its place. Thus, repeated contractions can tone and strengthen them.

At first, most mothers may be quite hesitant to start rebounding out of fear of accidental leakage (which is the result of a weak pelvic floor). But that reason is exactly why we advise you to start rebounding. We assure you that just a few weeks of rebounding will give you better bladder control and even improved orgasmic sensations.

Is rebounding a good workout for women?

We understand that, despite all the benefits of rebounding, as a woman, you may still have your reservations. After all, a woman’s body isn’t the same as a man’s.

Christie Jenkins, a coach and a twelve-time national trampolining champion believes rebounding is one of the most effective ways for women to get in shape. While some exercises such as the deadlift require large amounts of testosterone and may not always be recommended for all women, rebounding has no such limits.

What are the risks of rebounding?

There can be some negative side effects, but they can be easily prevented. This is because most of the time, the risks associated with rebounding are caused by cheap trampolines that don’t have the right kinds of springs in them.

For instance, a cheap trampoline could lead to a sprained ankle or even a fracture. In addition, if you have weak knees, it can cause severe knee pain that might last for days.

The worst thing that can happen is the damage it can cause to the hips. The recoil in most cheap trampolines is so fast that your bounce gets uneven. This results in sudden and unexpected jerks around the hips and can cost you several visits to a physical therapist.

Other than those we mentioned above, cheap trampolines can also give a person severe back and neck pain, as well as headaches.

But like we stated earlier, the negative side effects can be easily prevented. All you need to do is purchase a stronger trampoline even if it costs you a few extra dollars. Investing in a good trampoline doesn’t only strengthen your pelvic floor and provide you with several other health benefits. It can give you some quality time with your kids as well.

However, we advise you to consult with your doctor before you proceed with rebounding. Sometimes, the issues associated with the pelvic floor may require expert attention. Self-diagnosing them as a weak pelvic floor could result in bitter consequences.

Now that you are aware of these benefits (and the risks), allow us to share some simple rebounding exercises you might find useful. We recommend that you try them gradually, starting from the basics. This way, you won’t strain your muscles. 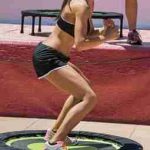 Start by bouncing on the trampoline but without letting your feet leave the surface. This may seem overly simple, but it has the power to boost your lymphatic system. It will also prepare the muscles for more rigorous exercise in the future.

While attempting to bounce, we advise you to bear the following steps in mind:

Now your muscles are prepared for a stronger workout. You must follow the same instructions as above, but this time, your feet can leave the surface of the trampoline. Just ensure that the distance between your feet and the trampoline doesn’t exceed 10 inches.

At this stage, the muscles are ready to take on more, so the instructions are a bit different:

This exercise is an excellent way of improving blood circulation. Soon, you’ll find that all that motherhood fatigue is wearing away.

By now you’ve mastered rebounding, so you can go ahead and try out new things, such as the butt-kicker. All you have to do is kick your butt with your heels while you are jogging in place.

You can also try bouncing on the trampoline and twisting your body, first to the left and then to the right. Once that is done as well, try jumping in place, but on one leg only. After a few bounces on that leg, switch to the other one.

After you have mastered all of these steps, you are ready to begin a rebounding workout routine. Making time for this may seem overwhelming, but it is essential for the strengthening of your pelvic floor muscles. Therefore, we strongly advise you to allocate a part of your day just for this.

The Internet has plenty of great rebounding exercise routines, and the best part is that once you buy a trampoline, setting time aside just to get to the gym becomes unnecessary. You can work out at your convenience, and mothers can use this time to have fun with their family as well!

We hope this article proved to be life-changing. The side effects of a weak pelvic floor can damage a woman’s confidence and self-image. However, by using a trampoline, you can put an end to all that negativity and live your best life!

Do like and share this post so that all women can benefit from it. What’s more, if you’ve got something to say about using the trampoline for strengthening the pelvic floor, then drop your comments below!

Does Jumping on a Trampoline Burn Fat? (Belly or Thigh)

Migraine or Headache After Trampoline Jumping: 4 Reasons Why