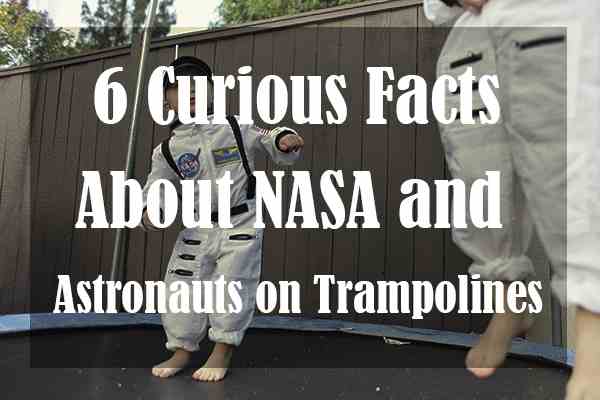 6 Curious Facts About NASA and Astronauts on Trampolines

We’re sure you know that jumping on a trampoline is fun — there’s no denying that. We’re also quite positive about you knowing that it’s a great workout.

But did you know that NASA is using trampolines in astronaut training? We bet you had no idea about that!

Well, it’s true. Astronauts on trampolines are a thing. And we have all the facts about NASA trampoline training. 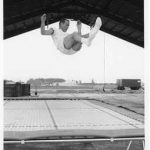 That year, the Biomedical Research Division of NASA conducted a study on the benefits of jumping on a trampoline. They did it because NASA had started to think that there might be more to rebounding than just good old fun.

But the scientists didn’t just wake up one morning with the idea to use rebounding in astronaut training. No.

One year before the NASA rebounding study, Albert E. Carter wrote a book titled The Miracles of Rebound Exercise. In it, he presented facts that prove the health benefits of jumping on a trampoline compared to those of running on a treadmill.

That’s where the Biomedical Research Division got their research idea.

2. Why was such a study necessary?

It’s no secret that astronaut training is hardcore — and for a good reason!

Although spending time in zero gravity seems fun, it can also be a huge health hazard. Astronauts expose themselves to a number of risks, and the challenges don’t disappear once they successfully come back to Earth.

It takes a lot of hard work to prepare for such a unique working environment, and NASA knew that right from the start.

3. The things that the NASA study on trampoline effects explored

In essence, the scientists wanted to see if there’s any truth to the statements that Carter made in his groundbreaking book.

So, they found eight male volunteers aged 19 to 26, and they asked them for help. All they wanted to measure was the subjects’ heart rates and oxygen consumption before, during, and after the test. In addition, they measured the amount of G-force they experienced at three critical points — the ankles, the lower back, and the forehead.

Since the researchers needed precise data, they had to standardize the experiment conditions. Thus, they provided identical sets of exercising equipment for all test subjects. Each set included brand new Nike running shoes and a pair of shorts.

Additionally, the subjects went through a brief training to learn more about lab procedures, treadmill running, and rebounding.

Once the research started, the subjects were first supposed to walk, jog, and run on a treadmill at four different speeds. They had 5 to 10 minutes to rest between the runs. During that time, the researchers would note down the statistics. Comparing the data from the experiment with that from previous studies concluded phase one of the research.

After a week, it was time for phase two. In it, the subjects were asked to bounce on a trampoline at four different heights. Again, they had 5 to 10 minutes to rest between the sessions. Just like in phase two, the researchers used the breaks to note down the statistics.

4. The things that the NASA study on trampoline effects found 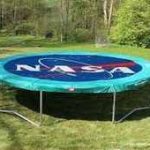 To make a long story short — the NASA study on trampoline benefits showed that rebounding is more beneficial than any treadmill workout out there.

To elaborate, the researchers concluded the following:

So what does all this have to do with astronauts?

Once they realized rebounding is a great way to combat the negative effects of low to zero gravity, NASA experts decided to take advantage of it.

In fact, rebounding has proven to increase the physical fitness of astronauts. The improvements in the area of balance and coordination, bilateral motor skills, muscular strength, and lung and cardio capacity happen naturally. What’s more, experts agree that rebounding does wonders in helping them gain the so-called “air sense.”

So instead of focusing on improving physical strength, future space explorers can dedicate their time and attention to other important things.

6. Benefits upon returning to Earth 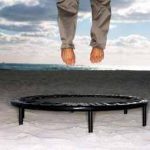 If you thought that the rebounding benefits end with the astronauts’ take-off into space, you need to think again. Trampolines can be of great help to them even after their space mission is over.

One of the most serious health issues space explorers face is the loss of bone mass. But jumping on a trampoline can help fix that. Namely, during any rebounding session, bone density is built with the help of the increased G-forces. Muscles, tendons, and ligaments are positively affected, too. Therefore, trampolining helps the entire skeleton get strong again.

It also appears that NASA uses trampolines to help astronauts deal with their lack of balance upon returning to Earth. By negating the effects of bone mass loss, these have definitely become a staple in space exploration training.