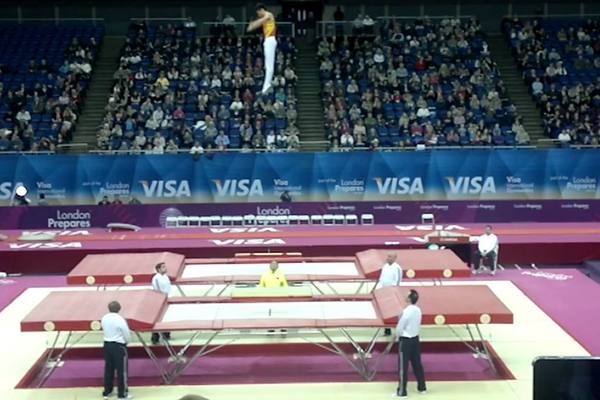 Everything You Need To Know About Olympic Trampolines For Sale

If you tuned in the the most recent Olympic Games, chances are you enjoyed watching the trampolining events. Olympic trampoline gymnastics are extremely impressive to watch, as the trampoline allows athletes to perform feats that would be impossible to perform on the floor.

Nowadays, more and more people are becoming involved in this sport as a way of maintaining fitness. So, what is the history of this sport, and what is involved? Where can you find an Olympic trampoline for sale? Read on for our handy guide.

What Is The Trampoline in Gymnastics?

Trampoline gymnastics is a separate sport in the Olympics from the regular gymnastics category, which is more well-known. Whilst the two share some similar skills and features, this event involves routines consisting of a range of gymnastic elements performed on an Olympic-sized trampoline. 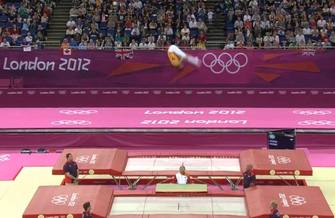 Trampolining has only become an Olympic sport relatively recently. However, it had already become an established competitive sport before it became an Olympic event. Trampolines as we recognise them were first developed in 1936 by gymnasts from Iowa University. However, it wasn't until 1964 that the first world championship was held in London, as until then competitive trampolining had been limited to the confines of Universities and schools. 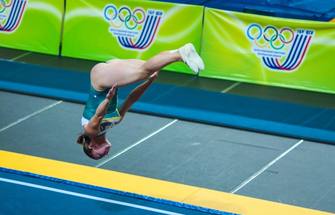 Interestingly, Olympic-style trampolines have not only been used for gymnastics. As they offer an experience of weightlessness, they have historically been used by NASA and the US airforce as part of training for pilots and astronauts.

When Did Trampoline Become an Olympic Sport?

Trampolining first became an official Olympic sport at the Sydney Olympics in the year 2000. How Big Is an Olympic Size Trampoline?

There are strict regulations for what constitutes an Olympic trampoline, and these are stipulated by the Fédération Internationale de Gymnastique (FIG). Most other competitive trampolining bodies also follow these guidelines. Olympic trampolines are usually referred to as being 17 feet long and 10 feet wide. However, these are in fact rounded measurements, and the actual measurements are far more precise. A trampoline that meets the regulations for an Olympic competition measures exactly 16.5682 feet x 9.54724 feet!

However, the size of the trampoline is not the only thing that is measured very precisely. The jumping mat, which is around 6mm in thickness, must be timed and shown to return to it's original form in under one second after impact. Olympic trampolines also have to include safety padding around the entire edge of the trampoline, in a similar way to most trampolines that people have in their back yards. This padding cannot be any thicker than 2.16535 inches. So, as you can see, for a trampoline to be allowed in a competition it has to obey very strict guidelines.

When it comes to height, the measurements are also extremely precise. To meet the FIG approval criteria, a trampoline must be exactly 3.78937 feet high.

Most Olympic-sized trampolines available for sale have a maximum weight limit of 350 lbs.

When an athletes compete in the Olympics, they must perform two routines. The first is the compulsory routine, which is decided by committee and set as a non-optional series of combinations. All athletes must, therefore, perform the same first routine. The second routine is voluntary. This means that athletes and their coaches are permitted to create a routine of their own choosing. 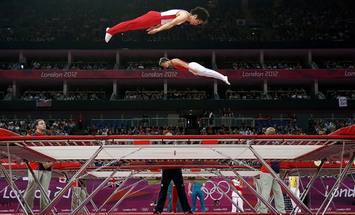 A routine is made up of a series of move combinations. The main moves used in trampolining are jumps, somersaults and twists. Basic jumps use the same body positions as regular gymnastics, and these are the straddle, pike, tuck and flip. There are also four key landing positions:

There are several rules of Olympic trampolining that must be observed: 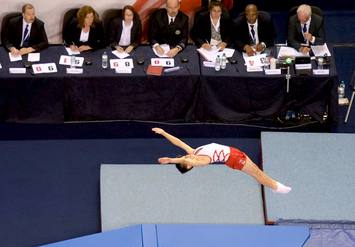 Olympic trampolining is scored by nine judges, who have different areas of responsibility. One is the chairperson. In addition there are to judges focusing on scoring the difficulty of the routine, five focus on the athlete's execution of the routine, and just one monitors the time of flight. Here is a more detailed run-down of the scoring in each area:

As a highly competitive and professional sport, athletes who wish to attain the high standards required to be an Olympic competitor must undergo rigorous and professionally-designed training programmes. These will be under the supervision of a coaching team. There is no set time that athletes train for, as it depends on their individual needs and whether they have n approaching competition. However, most athletes will train for up to 6 hours a day for 5-6 days a week to reach the required standard. It can take around 7 years to reach an Olympic level.

There are several attributes necessary to become an Olympic trampoline athlete. First of all, a very high level of physical fitness is required. Also, the athlete will need to be able to generate the power necessary to achieve very high jumps. Without enough height, more demanding moves such as somersaults and mid-air twists will not be possible. Furthermore, a huge about of courage is required, as these moves are challenging and present a level of risk. Finally, athletes must be highly dedicated. As we mentioned above, the many hours of training required over a long period of time take commitment and focus.

The USA trampolining team that competed at the 2016 Olympics in Rio consisted of two people, a male and a female athlete.

Logan Dooley was the male athlete, and finished in eleventh place for the USA. Nicole Ahsinger was his female teammate. She finished slightly lower than Dooley in fifteenth place.

However, some people decide they wish to own an Olympic trampoline, or purchase on for a gym or club. You may be surprised to learn that Olympic trampolines can be purchased reasonably easily. Here are two options currently on the market:

Skywalker are a leading manufacturer of trampolines, and they have an Olympic-sized model available to buy. Although not cheap, this is a more budget option retailing at around $999. Here are the key features: 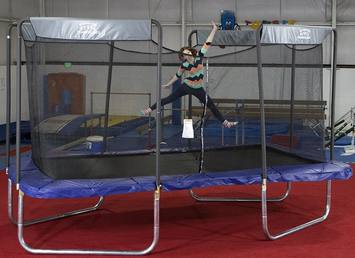 As one of the market leaders, Jumpsport trampolines are well-regarded in the industry. However, this trampoline doesn't come cheap at $1,999, making it just over double the price of the Skywalker model. Here are the key facts: 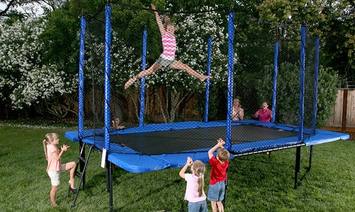 Olympic trampoline﻿﻿ gymnastics is and dynamic sport, both for audiences and participants. Luckily, there are many ways that you can access this excellent form of exercise for yourself. Hopefully, having read our comprehensive guide, you now know a little more about Olympic trampolines and their measurements. Furthermore, we hope we have whetted your appetite to find out more about Olympic trampoline gymnasts and the incredible moves and routines that they perform. If you are hoping to find an Olympic trampoline for sale, the options we reviewed above are great options. Both can be purchased from the retailers' websites in the USA.

Before you attempt any of the more risky moves you may have observed when watching Olympic trampoline gymnastics, please seek the advice and supervision of a qualified and registered instructor. Unless performed properly, movements such as somersaults and mid-air twists can be very dangerous. A coach will be able to advise you on how to perform these movements properly and safely. Happy bouncing!