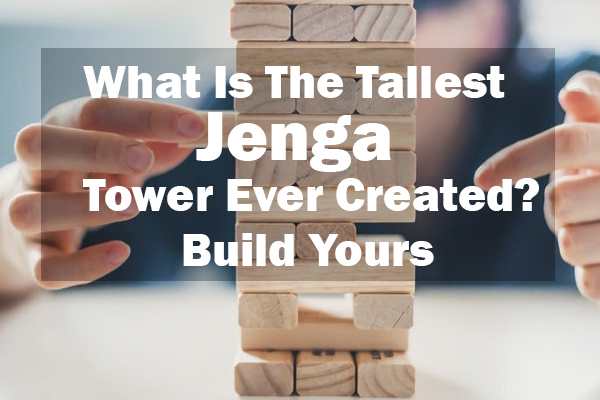 What Is The Tallest Jenga Tower Ever Created? Build Yours

We’ve found out that the tallest Jenga tower ever created is 40 2⁄3 levels tall. Robert Grebler set this Jenga record height in 1985. That means that Grebler failed to finish the last story before the tower collapsed since you need to put three blocks before you start another level.

The Vintage Game collection version of Jenga in 2008 included this record. Moreover, Grebler made the tower with the original set that was produced by Leslie Scott, the creator of the game.

There is a recent picture of a Jenga tower that is 40 levels tall. That picture gave us an opportunity to see how Grebler’s record might have looked like. There have also been photos of towers that are even higher, but they usually don’t follow the three-block-story rule. That means that none of them had completed a 3-block story before they started a new one.

Trying to build the tallest Jenga tower is surely one of the main things that drive us when it comes to this game. We all know how many times we’ve felt disappointed after reaching level 30 only to have everything crash down. What’s more, seeing photos or videos online that show some unreasonably tall towers can both encourage and put us down. That’s why it’s important to understand the techniques that they use. Sometimes they don’t follow the rules.

There is a YouTube video that shows the tallest giant Jenga tower. It goes up to 66 inches or 1.68 meters. However, the players used multiple sets to reach such height. That’s why we always have realistic expectations for the size of our Jenga.

How to Make The Tallest Jenga Tower? 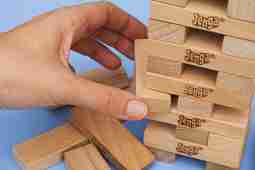 Building the tallest Jenga tower sure is tricky, especially if you’re following the rules. However, things are easier when our friends are actually willing to cooperate. But when we’re competing against each other, our tower might not rise a lot at all.

Nevertheless, there are certain strategies that we can incorporate in order to increase the height of the Jenga tower without having it fall down. If used thoughtfully and correctly, we might even reach the height that we haven’t reached before.

Try to remove bricks that are the loosest. If you have an eye for detail, you’ve probably noticed that they aren’t quite the same size. During the manufacturing process, there is usually a high tolerance when it comes to that. That fact can become our most powerful asset while playing.

So why should we always remove loose bricks first? Well, only some of the bricks actually give support to the tower’s weight. Others are usually just resting there without a proper function. Those that are loose aren’t experiencing much force pressure. That’s why we’ll be able to remove them quite easily and still maintain the structure of the Jenga tower.

Another thing we should try to incorporate in our play style is to raise our tower evenly and restack the bricks. That means that we can theoretically build the whole tower out of the bricks that are located in the center. However, that can be hard to achieve if we’re not co-op playing, as it doesn’t guarantee that each layer will be centered over the foundation. Basically, we would have to calculate and compensate for any deviations accordingly. But if we center every level with enough care, we might be the ones to construct the tallest Jenga tower ever.

Remember, achieving perfect balance and thinking through every next step is the staple of this game. For example, we always stay calm, our hands are steady, and we do our best to spot the loosest brick. Try it out, and you will surely benefit from this advice.