Jumping on the trampoline sure is fun. Whether you are a child or an adult, it’s an activity you can enjoy on warm, sunny days.

However, although there seems to be nothing professional about it, trampoline bouncing can take a more serious turn. In fact, this simple device is a centerpiece of many world records.

Humans are competitive by nature. This spirit drives us to win competitions and set new records. But if you’re looking for the strangest of records, look no further than the Guinness Book of World Records. In no particular order, here are 14 zany, extreme, and fun records that people have set on the trampoline.

1. Longest Time Spent on a Trampoline 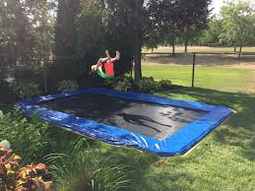 For our first record, we have to go back to August 1981. An Illinois man called Jeff Schwartz had decided to spend 10 days jumping on his trampoline. For him, this meant 250 hours of uninterrupted jumping.

His trampoline ordeal ended a whopping 266 hours and 9 minutes later. But how can somebody spend so much time just jumping and doing nothing else? Well, the rules allowed Schwartz to have closely monitored breaks for sleeping, eating and using the bathroom.

Halfway into setting his record, Schwartz managed to raise close to $5000 for cancer awareness. That certainly made him more than just a guy trying to set a record.

2. Most Seat Drops in One Minute

Our next strange trampoline record is set by Oleksandr Nakonechny from Ukraine. In September 2010, Nakonechny did 49 seat drops in Soltau, Germany to mark the launch of the 2011 Guinness World Records.

Similar to Schwartz, Nakonechny is also a seasoned trampolinist. He is well known for participating in pirate shows at Heide Park.

It is worth noting that other people have unofficially broken this record, but we’ll stick to official records for now.

For our next trampoline record, we have to go back to September 2003. A UK trampolinist named Brian Hudson managed to do an incredible 3,333 consecutive somersaults on a trampoline.

We bet that the stunt was dizzying even for the spectators, let alone for Hudson. So, for those having trouble with their first somersault — don’t despair! It takes a lot of practice to do it well, so get on your trampoline and start practicing!

Since nobody has broken Hudson’s record yet, our readers might just try to best it. But be careful; otherwise, the attempt might leave you lightheaded.

Since ordinary backflips weren’t enough, we’ll up the ante by introducing unicycle backflips. Now, setting this record is certainly not what we thought was possible.

However, Cameron Fraser begs to disagree. The Canadian did two consecutive unicycle flips. Although this number does not look that impressive at first, it’s actually hard to do even one.

First of all, unicycling is difficult in its own right. Second, doing a unicycle backflip on solid ground isn’t the easiest either, let alone atop a trampoline. Therefore, we can only commend Fraser on setting this weird trampoline record.

5. Most Glass Tubes Broken With a Trampoline Jump

Out of all the strange records we’ve discussed so far, this one takes the cake. Although it’s not exactly clear to us how it all went down, we are sure that Ashrita Furman had a lot of fun.

Furman, a well-known record holder, managed to break 30 glass tubes with only one trampoline jump. A word of advice — don’t try this at home, or you might hurt yourself.

However, breaking glass tubes is certainly not the only thing Furman is famous for. In fact, he now holds 226 records, bringing his total of set records to 600. One record we found entertaining is a 76-foot pencil he built in just three weeks. Now that’s both impressive and weird.

6. Most Jumps on a Trampoline Grabbing a Bar

While not as weird as the previous one, this feat is certainly impressive. In 2014, an American called Paul Starosciak broke this record.

At first, Starosciak was jumping high before he was able to grab hold of the bar. Then, he dropped onto the trampoline. However, he had to make sure to soften the impact by landing back first. After that, he would bounce up to five meters in the air and grab the bar again in only two seconds. As if that wasn’t strict enough, he also had to use his feet as well as his hands while holding onto the said bar.

He bounced 39 times, breaking the previously set record of 11 jumps. We can confirm this man is no quitter. In fact, he continued bouncing even though he hit the bar with his head while attempting to grab hold of it.

We mentioned earlier that Starosciak had to do a 5-meter bounce to grab the bar. While this is impressive enough, it gets better. Meet Sean, Eric and TJ Kennedy. In 2014, this trio of brothers broke the record, setting the bar as high as 6.73m.

The brothers didn’t just use any normal trampoline — they used an Olympic-class trampoline. Sean was the “main jumper,” while the other two provided additional force.

6.73m is no joke when we take into consideration that an adult giraffe is 6 meters tall. So to all our readers out there — better stick to your backyard trampoline for now.

So far, we’ve only covered records related to vertical jumps. However, this time, our record-setter opted for a tumbling trampoline. In March 2012, the aptly called Record Show introduced viewers to Charles Burrows.

This UK man managed to jump through a hole that measured 80x80 centimeters. It was two meters high, and Burrows had to pass through it without making contact with its outside.

Burrows has a long career in gymnastics, and he managed to beat the other challenger, Germany’s Lukas Steiner, by 20 centimeters.

While we all like to play basketball in our backyard or the local court, not many of us go beyond landing lucky three-pointers. But how about dunking after taking a 10.05-meter leap?

We’ll leave that to Jordan Ramos. In 2015, the UK man broke the record he had previously set by only 5 centimeters. Though the difference was small, it’s impressive how Ramos didn’t just stop at his previous record.

Mind you, a 10-meter leap is no small feat to achieve, so hats off to Ramos and his mad dunking skills.

10. Fastest Time to Dress in Formal Attire While Bouncing on a Trampoline 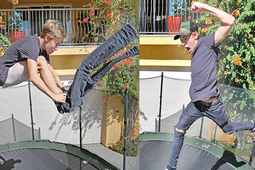 If you thought doing backflips on a unicycle and breaking glass tubes on trampolines was strange, we hate to disappoint you.

April 2012 brought us another unusual trampoline-related record. Undressing and putting on more formal attire is relatively easy, but not if you’re doing it while jumping on a trampoline. Well, Raul Gomez did just that.

At the start of his ordeal, Gomez only wore jeans and a T-shirt. Soon, he replaced the T-shirt with a formal shirt. Soon after that, he put on a tie and removed his jeans. Putting on formal pants must have been the hardest, but it took him only 45.03 seconds to do it.

We’ll think of Gomez the next time we take too long to get dressed for a formal occasion.

11. Fastest 100m Sprint While on a Trampoline

So far, we’ve talked exclusively about jumping on trampolines, but what about running? As is the case with riding a unicycle, using a trampoline for running is much more tasking than doing it on solid ground.

Because the trampoline is made for jumping, its softness will definitely slow down every step you take. However, this didn’t discourage Steve Jones from trying to sprint on it anyway. In fact, back in 2009, he successfully set the record by sprinting 100m in 21.11 seconds.

Even though breaking this record seems easy, it takes a lot of core strength. So don’t worry if you can’t do it. At least it’s a good workout for your core muscles.

12. World Record for Most Backflips While on a Trampoline

Earlier, we mentioned Brian Hudson doing 3,333 somersaults. One thing was missing, however — a time limit. This is where Luca Opperman from the US comes in with the current world record of 51 backflips in one minute.

Introducing a time limit changes the game, as Opperman had to mind the speed at which he was flipping. Moreover, the video clearly shows him struggling through the last 10 seconds.

Nevertheless, it was worth it because nobody has beaten his record ever since. At the time of writing this article, Opperman remains unchallenged for the 11th month in a row.

13. Most Number of People Bouncing Together at the Same Time

While our previous records mostly focused on bouncing individuals, now it’s time to push the number of people to the limit. And no, we did not forget about the three Kennedy brothers. However, the situation is a bit different here.

The 2017 hot Singapore summer brought us as many as 375 people bouncing away on their mini trampolines. The participants had to do it simultaneously for around five minutes, and surely, they were successful.

By doing so, they broke the previous record. Namely, only a few weeks earlier, 343 Londoners became the record holders. Too bad Singapore was more determined in their bid to get even more people to jump together. 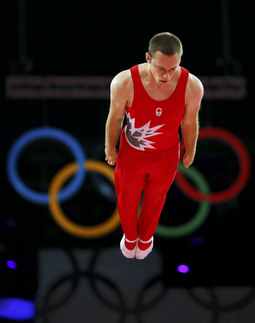 Yes, you read that correctly. One man’s backyard fun is another man’s Olympic sport. And it has been like that since the year 2000. Not only that, but scoring is done under strict guidelines.

For example, DD stands for degree of difficulty. The judges calculate it by adding variables to half turns and quarter somersaults. On the other hand, we have the ToF (time of flight) score. Basically, this is the time that the athlete spends in the air from the moment they leave the mat until they touch it again. Both criteria combine to make the total score.

With the terminology out of the way, we introduce Jason Burnett from Canada. In 2010, he broke his previous record (DD for men, 17.50) with a score of 18. The standard score among top competitors is more or equal to 16.5.

As for women, Great Britain’s Emma Smith holds the DD record of 15.60, which is significantly higher than the usual 14.50 score.

And there you have it — our list of 14 crazy trampoline records. Although the trampoline is a pretty humble device, people still find ways to break world records on it. However, if you decide to set a record of your own, we advise you to be careful. Many of these records are set by seasoned athletes, so take care!

We hope you enjoyed our list of wacky trampoline records. If you did, please share this article and tell us if we missed any records in the comments below.

How to Play Crossfire on a Trampoline