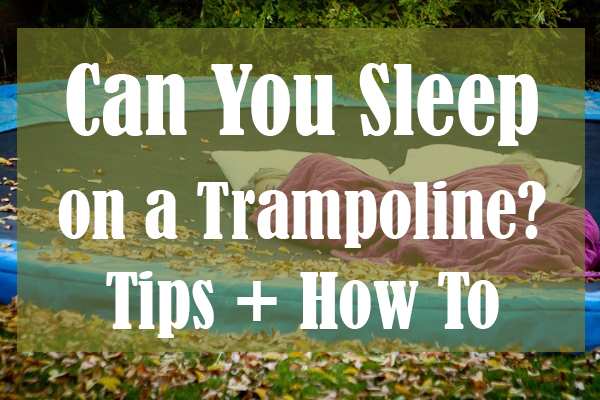 Can You Sleep on a Trampoline? Tips + How To

Should I sleep on my trampoline? Most trampoline owners ask themselves that question once in a while. Well, if you’re wondering whether it’s safe, the answer is a resounding yes. That is, as long as you follow some basic safety tips for sleeping on a trampoline.

More importantly, trampoline sleepovers can be a wildly fun activity for folks of all ages! If you have a backyard trampoline, you can allow your kids to ask a few of their friends over and have them camp out. Or you could plan a fun family activity and propose a trampoline sleepover to your spouse and kids. The little ones will definitely love it!

However, even adults could enjoy themselves by inviting their best friends over to unwind on the trampoline after a stressful week at work. Really, anyone can benefit from spending a night under the stars, even if they’re alone.

In any case, sleeping on a trampoline in the backyard is a much safer bet than camping out. After all, it makes getting food and going to the bathroom so much more convenient! Not to mention that there’s no chance of getting stranded because your cell phone ran out of charge.

So if you’ve ever asked yourself the question Should I sleep on my trampoline? — you’re in luck. We’re about to talk about some of our favorite tips and tricks for having the best trampoline sleepover ever.

Is It Safe to Sleep on a Trampoline? 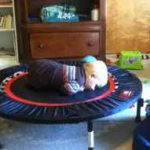 As we have already revealed, sleeping on a trampoline could be very safe indeed. However, there are a few general concerns people often worry about. Namely, people who roll around in their sleep might not be too keen on ending up underneath the trampoline during the night. Then, there’s also the concern that someone might get a cold while sleeping under the open sky.

These are all valid concerns, but there are ways to get around them. Essentially, all it takes is some kind of a cover, whether it’s blankets, sleeping bags, or a full-on trampoline tent. In fact, trampoline tents come in all shapes and sizes. There are plain, dome-shaped ones and ones that look like pink castles or clubhouses.

But even though trampoline tents would keep the happy campers safe on top of the trampoline, most of them would also block the view of the night sky. For many people, the Should I sleep on my trampoline? moment was inspired by the starry sky. So our advice for those people would be to consider installing basic safety enclosures that’ll keep them from rolling off the mat.

And to keep warm, we prefer to use a sleeping bag rather than a simple blanket. Also, depending on the season and the weather conditions in the area, the trampoline may be damp with morning dew come morning. So, in the interest of staying dry, we suggest getting a sleeping bag.

However, we’re also partial to sleeping under the stars. If the weather allows it and if there are no mosquitos or other possible dangers in the area, why not try it?

How to Sleep on a Trampoline 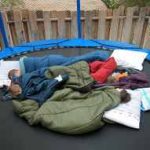 Admittedly, we may be slightly biased about this. But having a party under the night sky is a fool-proof way to have a lot of fun! And because you keep learning new things each time, every sleepover surpasses the last. However, if you’re a complete newcomer to the concept of backyard camping, we have several basic tips for sleeping on a trampoline.

One thing you can do to make the most of your night is to decorate for the occasion. If the trampoline is encircled by a simple safety net, we suggest putting up a curtain canopy or even fairy lights. Add a pile of pillows and blankets onto the mat too! However, if you’re planning on jumping before you settle in for the night, you can keep the decorations off the trampoline until you finish.

We also recommend grabbing some convenient snacks and thinking of games ahead of time. If the sky is clear, use a book or an app to figure out which stars you’re looking at!

Trampoline Beds to Sleep On for Sale

Sure, you can sleep on your outdoor trampoline. But did you know that many people have trampoline beds indoors? You can have one too if you really want to sleep on a trampoline every night. However, we still prefer to keep the trampoline sleepovers sporadic — the anticipation makes it even more special!

Sleeping on a Trampoline in the Summer 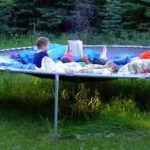 Having a trampoline sleepover is surely one of our favorite summertime activities. After all, our yards are usually much cooler than our bedrooms, which get more and more stuffy throughout the course of a hot summer day. Who can sleep in a hot room, right? Even scientists agree that the optimal sleeping conditions include a cool environment and a warm cover.

Furthermore, sleeping on a trampoline also enables us to get another thing that would greatly increase the quality of our rest: exercise! Just imagine jumping to your heart’s content, before lying down and stargazing until you fall asleep. An electronics ban would also let you be lulled into sleep by the darkening sky. After all, receding daylight prompts our bodies to release the sleeping hormone, melatonin.

But now we’d love to hear from you! Are you one of the many people who’ve wondered Should I sleep on my trampoline? Have you actually done it? We’d love to hear all about it in the comments below! Make sure to also share this post with some of your other trampoline-loving friends so that we can all learn some new tips for sleeping on a trampoline!

Does Jumping on a Trampoline Burn Fat? (Belly or Thigh)

Migraine or Headache After Trampoline Jumping: 4 Reasons Why