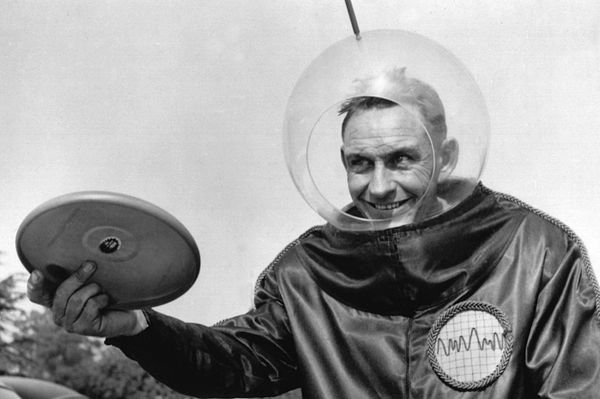 History Facts: When Was Frisbee Invented? Where? Who Did It?

Are not really that different. When they get bored they look for something exciting or entertaining to do to ease the boredom. That includes inventing the Frisbee. Rumor has it that it was first invented in 700 BC and that the ancient Chinese had a hand in its creation.

When Was Frisbee Invented? The answer to those questions depend on who you talk to. Some people will say an ancient society did it for fun. Others will point to the modern Wham-O version which came into existence in 1957 and was created by W.F. Morrison.

Exactly who created the Frisbee first remains a mystery but if you keep reading, you will find out more interesting facts about its creation. This article traces the history of the flying disc.

When was Frisbee Invented

This is hard to say exactly as there are no real ancient manuscripts extant today that contain any information on when the first Frisbee was invented. About the only information we have on ancient Frisbees are the discs used and described that were used in the original Olympic Games in Greece.

The best records we have come from the modern era and the 19th to 20th centuries. The safest thing we can say is that many people independently came up with the same idea. But if you want the earliest version of the Frisbee then that would go to the Frisbie Pie Company or more specifically the students of the colleges who bought the pies.

These students, as far back as the late 19th century, found that the empty pie tins flew quite well through the air. Many colleges take credit for having the first student to come up with the idea and who was actually first remains a disputed mystery as no records recorded the event.

However, the name for the flying disc came from the Pie Company that made the pie tins. It was called Frisbie and future inventors took inspiration from that name and labeled the toy Frisbee.

But the name is only one of many since over 60 toy companies make their version of a Frisbee and give it their own creative label. The official Frisbee was created in 1948 by W.F. Morrison and his partner Warren Franscioni.

When Wham-O bought out the rights to the toy from Mr. Morrison in 1957, their top employee Arthur "Spud" Melin renamed it the Frisbee. This was done in honor of the Frisbie Pie Company

Was Frisbee Invented by Accident 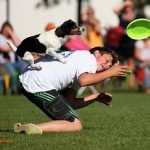 Most great inventions are done by accident. Usually the inventor is looking to create something else when they stumble on the next great invention that makes them famous.

With the Frisbee, the original concept may have been found accidentally. The bored college students were not looking to invent some new fad to sweep the nation when they found that the Frisbie Pie Company’s pie tins could sail through the air.

Once they made that discovery, then all that was left was to use their imaginations to implement their discovery. History does not tell us how they used the pie tins or what games they created.

The more modern and official Frisbee was also discovered by accident. It was in 1937 when W.F. Morrison and his wife began tossing a popcorn lid to each other that the idea hit them.

Even the marketing of the toy was done by accident. As the couple were tossing a pie pan to each other, they were offered about 25 cents for the pan. This gave them the idea that there was a market for such a toy.

F. Morrison and his wife began to produce pie tins for fun until the second world war began. After the war, Morrison and Franscioni began to make the first plastic versions.

From then on the accidental influence was removed and the inventors got down to some serious business trying to find the right materials and the best ways to produce the flying toy.

How was Frisbee Invented

At first, the original Frisbees were just pre-made metal pie tins. These little objects flew quite well. While it is not recorded, what may have spurred the inventors to move on to different construction level would be the danger that came from flying metal.

Also, metal is heavy and takes more arm power to toss across the lawn to the other players. To make them lighter and fly better, Morrison did his research and found a company that could make the Frisbees out of flexible polypropylene plastic.

This plastic material could glide better inn the air. And allowed the wind to influence its flight. This brought new challenges to the fun pastime. Also, the plastic material was cheaper to use over metal.

If any of those students who used the original Frisbie Pie Company’s pie tins was a student of ancient history, then they may have been inspired by the ancient Greek use during athletic competitions.

A little inspiration is all that is needed for great inventions to come into existence. The ancient Olympics may have provided that spark. 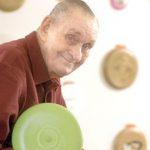 Since we have no records detailing the ancient invention of the toy, nor are there any modern records describing the student or students who used the original pie tins as a flying toy, it is safe to conclude that W.F. Morrison and his wife should be credited with the Frisbee’s invention.

They were the first to realize the toy’s potential and took the steps to produce as many Frisbees as they could. It was after World War 2 that production of the toy expanded as Morrison had a new partner. They made as many as they could, then went to the different fairs and other events to market their product.

As they moved from city to city, they found that the toy had a built-in audience. People were excited about the game when it was demonstrated. It was in early 1950 that Morrison and his partner parted ways and Morrison then began to search for cheaper construction materials and a way to make more units faster.

In the the end, and although he held the patent, he sold the toy to Wham-O who took the Frisbee to the next level. Wham-O’s General Manager Edward Headrick made the key changes to the construction of the Frisbee. He changed the mold, altered the design.

The new design also changed the weight and thickness of the disc. These changes made it easier to control and be more accurate when thrown. From there the rest is history and Wham-O sold over 100,000,000 units before selling the Frisbee to a competitor

Where was the First Frisbee Invented

Believe it or not, the modern Frisbee was invented in Southern California. The beaches of Los Angeles was where the Frisbee got its start. The first one sold for about 25 cents.

But if you go with the legend, then the Frisbee was first invented in the American East and the all the colleges who bought ready made pies from the Frisbie Pie Company.

Today, all over the country and the world roughly 60 different toy manufacturers produce their version of the Frisbee. The toy is so popular that to date it has sold over 200,000,000 units and counting.

Why was the Frisbee Invented 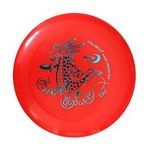 There are many reasons behind the invention of the Frisbee. It is said that the ancient Chinese used the original disc as a weapon in warfare. They would use it as silent attacks on their enemies.

Then the ancient Greeks used it in athletic competition. The ancient athletes had a new game to demonstrate their athletic superiority over their competitors. Fast forward to the modern era and we have the Frisbee coming into existence to reduce the boredom college students felt.

These students from a variety of American colleges used the Frisbee to relax, play games and play new sports. But those were not the only reasons the Frisbee was invented.

When W.F. Morrison got the idea for his version of the Frisbee, he invented it to make money. He and his wife saw the potential of the toy and worked hard to make that potential a reality.

It is hard to say how much money the couple made but one thing is for sure, those who have made the toy over the preceding decades did make a lot of money. The toy is very versatile and has a variety of uses.

The Benefits of Playing with a Frisbee

It may not seem like an elaborate or sophisticated piece of equipment. But this simple toy does bring a lot of health benefits to those who play with it. Here are some of those benefits everyone can experience:

The Frisbee is Good for Survival

The ancient Chinese used this toy as a weapon to help them stay alive during war time. But there are more practical methods you can use the Frisbee to help you survive.

Here are some of those practical ways you can use a Frisbee outside of having a lot of fun:

From its simple and fun filled origins comes a toy that has more uses than a Swiss Army Knife. From innocent college students playing with pie tins, the Frisbee has grown up to the point that it can sell millions of units just because it is a fun toy to play with.

The history of the Frisbee is quite interesting. Plus it is a good object lesson of what can be achieved if you put your mind to it.

How to Practice Disc Golf at Home or Without a Basket