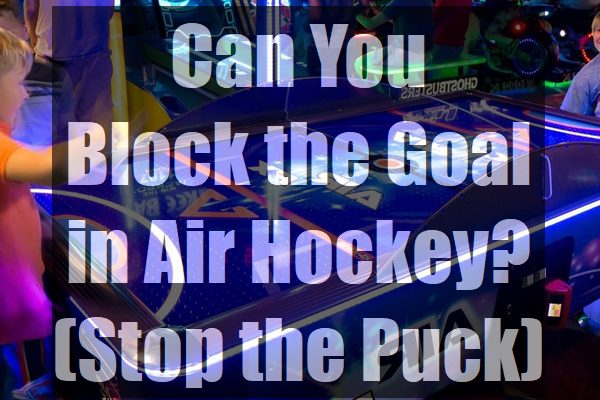 Can You Block the Goal in Air Hockey? (Stop the Puck)

Rules exist for a reason. They help keep the game safe, equal for all, and are designed to keep the game fun and exciting. Even air hockey has rules and these rules helped turn a pastime into a professional sport.

Can You Block the Goal in Air Hockey? Yes, you can apply a variety of defenses to protect your goal and one of those defenses is to keep your paddle close to your own goal. Some people recommend that you move out about 8 inches to start and fall back to your goal. But it is up to you.

There are a lot of rules to the game of air hockey.l But they are not bad rules, Continue to read to get all the information you need about the rules of the game.

Can You Trap the Puck in Air Hockey

Trapping is actually called topping the puck. When you trap the puck by placing your paddle on top of it, you are committing a foul. The cost of that foul is your opponent gets possession of the puck.

It is a tempting thing to do but try to resist temptation. Giving your opponent a free shot is not the wisest strategy to use in competitive air hockey.

Can You Stop the Puck in Air Hockey 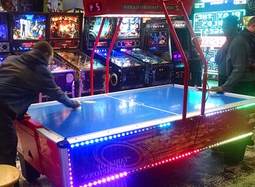 The only way you can stop the puck is by using your paddle. That is if you do not top the puck when stopping it. If you use your hands, fingers, wrists or other parts of your body to stop the puck then you have committed another foul.

The penalty for that offense is that your opponent gets possession of the puck. If the puck is headed towards your goal and you use anything other than the paddle to stop it, then you have committed goal tending. Your opponent gets the puck again but the potential goal is not counted.

Can You Catch the Puck in Air Hockey?

The only time you are allowed to catch the puck in an air hockey game is when it has left the table. This includes when it is flying towards you and could possibly cause you an injury. If the puck is still in play and will land in play, you cannot touch it, even if it is in the air.

Touching the puck with anything other than your paddle results in a foul and your opponent gets the puck again.

#1. the puck leaves the table- for any reason, it is a foul on the player who sent the puck off the table. Even if it is a defensive movement that caused the puck to leave the table area. The penalty is your opponent gets the puck

#3. When the puck is on your side of the center line, you only get 7 seconds to hit it. This means you may not use as trick shot that will win the game. Speed is essential in air hockey. After 7 seconds a foul is called and the puck goes to your opponent.

#4. A face off or a coin toss determines who gets the initial possession of the puck. There are different ways to handle a fair face off.

#1. Where can I get a complete set of air hockey rules?

You can go to the USAA or AHPA websites and click on the tab that says rules.

#2. To win the game how many goals do I need to score?

In air hokey it is the first person to score 7 goals to who wins the game.

Rules are not meant to be broken. They are in place to keep everything fair for ever participant. The rules of air hockey may seem long, but they cover every aspect of the game ensuring that all players have fun and stay friends after the competition.

How Does an Air Hockey Table Work? Parts + Physics Explained

What Are Air Hockey Tables Made Out of? Table Materials