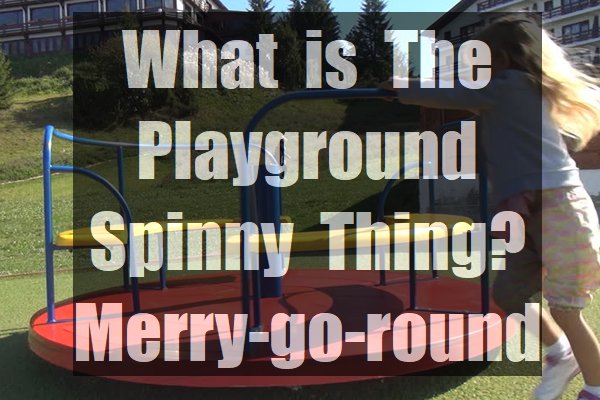 What is The Playground Spinny Thing? Merry-go-round

They are an integral part of most parks and schools playground equipment. You and your friends probably spent hours playing on a merry go round, yet you know so little about it.

In this article we are going to get you up to speed on everything you should know about a merry go round. This article is filled with a lot of interesting information that you can pass on to your children when they ask merry go round details.

Who invented the merry go round 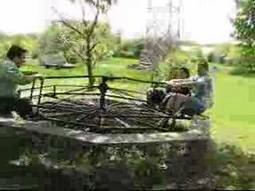 Believe it or not, there is an actual merry go round museum. It opened its doors in 1990 and is located in Sandusky, Ohio. If you visit this museum you may find out many facts about merry go rounds.

One fact you shouldn’t get from them is who invented the merry go round. That information has been lost to time. The merry go round has been in existence for 1600 years, dating back to the Byzantine period.

When were merry go rounds invented

Once it was discovered by the Crusaders, the idea was brought back to their homelands where it was kept as a military secret. For many years it was used in Western Europe as a training device for war, just like the Turks did.

Eventually someone saw the fun and profitability of the merry go round and produced recreational models. The rest, as they say, is history.

Is a merry-go-round the same as a carousel 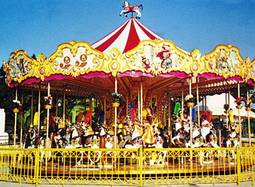 This is not true. The terms merry go round and carousel are synonyms and refer to the same thing. The word carousel comes from the Italian ‘garosello’ and the Spanish ‘carosella’ which means little battle.

The word ‘carousel’ was used to refer to a horse ballet or a musical ride found at many royal weddings.

Why is a merry go round called that?

It is hard to pinpoint the exact reason why a merry go round is called a merry go round. Part of its influence would be from the word the British used to describe the ride. The British English term is roundabout and that may be derived from the fact that the carousel went in a circle.

We can only surmise as to how the term merry go round came about but it may have to do with going in a round direction and both children and adults had fun riding on them. When the merry go round first came to America, it was called a carousel.

What are merry go rounds made of

There are two basic construction materials that can be used in making a merry go round. The early models were made of wood and for some carousels that material is still used to make the animal, cars, etc. Figures that children and adults sit on.

The main construction material used in most merry go rounds, no matter where they are found, is steel. Steel is strong, durable and can hold the weight that is put on them without any trouble.

Steel is the safest construction material to use and it will not burn like wood ones can do.

What makes a merry go round spin

It was the mid-19th century that saw the first real improvements to the merry go round. A circular floor was added to the central pole and the whole ride would spin together. Prior to this time, the baskets were suspended to a central pole in mid air and the pole spun, moving the baskets in a circular fashion.

Before motors were invented, the mid-19th merry go round often was pulled by horses. If horses weren’t available, then the operators of the ride would use their own energy and spin it themselves.

No wheels or tracks are used to spin the merry go round.

How a merry-go-round works

The merry go rounds found in basically all playgrounds and school yards are non- motorized. It takes a lot of leg power to get them up to speed and have the ride last a long time. The more children pushing the ride the faster it goes.

For those carousels found in amusement parks, a motor is used to propel the carousel. These motors have governors which regulate their speed and makes sure every one has a good time.

The answer to this question depends on the merry go round’s location. The manual ones in playgrounds and schools are usually limited by how fast the children or adult can run or move their arms.

There may be some governors place on these merry go rounds to make sure that they do not go too fast. If the carousel is located in an amusement park, then their speed is fairly regulated. No one wants any liability for injuries.

The horses or other characters on the platform usually move up and down at 2 mph. Meanwhile, the carousel itself moves at a speed of about 6 mph. Of course, these speeds depend on government regulations, location and other factors and there will be those that are faster or slower than these speeds.

The fastest merry go round or carousel was clocked at 18 mph.

Which way does a merry go round turn

Here is an interesting fact or two that you may not have known. If you live in North America and the European continent, then the carousels and merry go rounds turn counter clockwise. The animals, etc., face to the right.

Of course, individual merry go rounds around the world may be set to go in either direction. That decision is usually left up to the discretion or preference of the manufacturer, the purpose of the carousel and the the owner.

How big is a merry go round

The good news is if they are not regulated by the government or other safety standards, merry go rounds can come in a variety of sizes. It would depend on how many children are allowed to be on it at one time and its purpose.

Some merry go rounds only have enough room for 4 kids, and they run 8’ in diameter. A 10’ merry go round can hold up to 8 children at one time. While the big amusement park carousels have room for a lot more.. You will find all different sizes around the world.

How much does a merry go round weigh

A standard sized 8 child merry go round can weigh 800- 1000 pounds. That is because of all the steel that is needed to make the different parts including the handles.

The weight of a merry go round will depend on its size and the number of features you have on the riding platform. If you want to put a roof over it like carousels have, then you are looking at a large weight increase.

There are two legitimate answers to this question. The first answer is that if the park merry go round is made of wood or other non metal materials there is a lot of maintenance that has to be done.The paint fades, damage is done and other repair issues drive up the costs.

Many kids and adults do not act responsibly on merry go rounds so it is easier to be safe than sorry. The merry go rounds are removed, replaced by safer playground toys.

This is a subjective question and depends on how you or someone else define the term ‘dangerous’. part of the idea that merry go rounds are dangerous is that children are not sure of how to get on or off a moving merry go round safely.

The other part of merry go rounds being dangerous is that a lot of the users do not use their common sense and act very irresponsibly when using one. They make bad decisions,. try dangerous tricks and try to make the merry go round move faster than it should.

Other people do not see merry go rounds as dangerous because there are a lot of good characteristics that come with the ride. They see the merry go round as helping to build confidence, courage, balance and their strength.

Sadly, those that only look at the dangers are winning and the merry go rounds are being removed from parks and other public places.

We can answer that question in one simple word- yes. Because many people see merry go rounds as a dangerous place for children to play, they have got the different levels of governments to remove the merry go rounds from public areas and ban their return.

Now this may not be happening in every city, county or state but a large number of these local governments want to please their citizens and make the public parks,etc., safer for children to play in.

This attitude does not stop many companies from still making merry go rounds. It is just that their placement may be highly regulated. Some merry go rounds still found in public places have to have governors on them restricting their speed.

In spite of the opposition and removal of merry go rounds from many public places, you can still find them for sale. One of the biggest places to find a merry go round is Amazon.com. They have a variety of models and styles for sale on their web pages.

Or you can go to the many different playground manufactures or retail outlets and get a good merry go round for your family. You can look through the yellow pages to find the nearest retailer to your location.

How much is a merry go round

That depends where you buy your merry go round. Amazon.com has them for sale as low as about $200 and as high as about $2,000. The prices will vary. If you go to a playground manufacturer or retailer you will be looking at a variety of prices due to the size and design of the merry go round.

One retailer has models as low as approx. $500 and their more expensive models go for over $6,000. Those prices do not include the cost of the playground surface you would need to install.

Merry go rounds have an interesting life story. Taken from the ancient military training grounds to your playground the history of the merry go round is full of surprises.

It should have been expected that the rich and famous of earlier centuries were the ones who wanted the merry go round made available for their public and private use. This move eventually led to everyone being able to have an opportunity to play on one.

In spite of the possible dangers that come with playing on a merry go round, the benefits do seem to outweigh any hazards. People just have to be careful with how they and their children use one.

We hope you enjoyed this exploration of the merry go round.

Can You Use a Playground Slide for a Pool? (How to Guide)

7 Helpful Tips for Deciding on a Playground Slide Angle